Glowing cubes are cool and I tried to design mine some years ago.

I am not alone because in the past I saw the good job of [AlexTheGreat], and recently [3DSage] made cool glowing cubes.

Let me show you some concepts !

Some years before, I saw mysterious Cubes that seem coming from another planet. [AlexTheGreat] did these Alien cubes with strange pattern and he did an instructables. There are quite nice ! 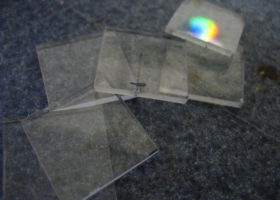 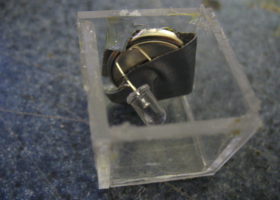 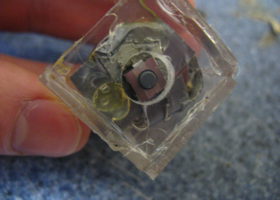 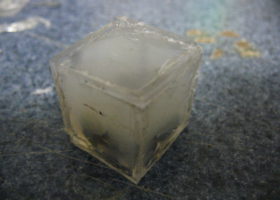 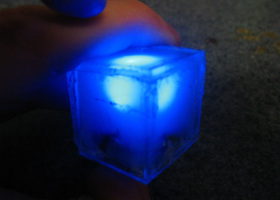 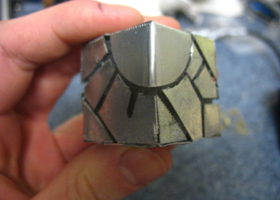 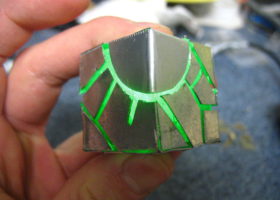 I tried some concept too to do cool glowing cube with mysterious appearance like from Alien or Inca inspiration. In mine, 6 sides of acrylic plastic are glued together, cube is filled with hot-glue and negative pattern in cut on self-adhesive labels and applied on the cube. Finally, chrome paint is sprayed and stickers are removed.

Remarks I can do with this first attempt: 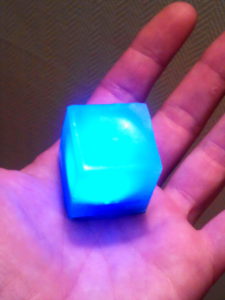 Later I tried cool effect with glowing LEDs inside. I worked on a small piece of PCB with a RGB led, a microcontroller, a rechargeable cell-battery with the size of a CR2032 and a MAX1555 to charge it and two metallic contacts to connect on power-supply. A diode bridge allows it to be connecting in any way.

My original idea was to add an amplifier to measure the skin resistivity. My objective was to make it glowing differently with the variation of resistivity of your skin. I found that human skin resistivity for less of one inch between electrodes is between tens of kΩ and some MΩ. First PCB with components and battery holder and second PCB with two gold-plating contacts. I share files on my Github.

For the realization I flooded the electronic circuit inside hot-glue in a mold. The result is pretty cool and functioning well !

More recently I tried to make molded epoxy cubes. The model is a dice with edges of 4 cm. I realized a silicon mold and cast epoxy with adding of silica to obtain a frosted effect and to diffuse the light. On the picture below, we can see 3 attempts. One without fillings of silica and two with different concentration. This one on top seems good for the project. 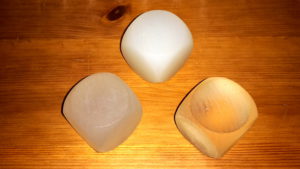 I have to do a new PCB and improve form and mean to assemble all without continuity errors. It would be better to degassing but I don’t have all the equipment. I will go on.

Recently I saw design of this small alien looking cube from [3DSage] and it motivates me for this post and telling story of my personal tests of glowing cubes.

[3DSage] used 3D printer to make the sides of the cube and he glued parts together with light inside (led + resistor + cell-battery) to made his Alien glowing cubes. He shares CAD files on Thingiverse.

It motive me to go on my tentative and improve my concept for better Mysterious glowing Artifacts !

Stay on with me, I will telling you asap I progress !

This site uses Akismet to reduce spam. Learn how your comment data is processed.